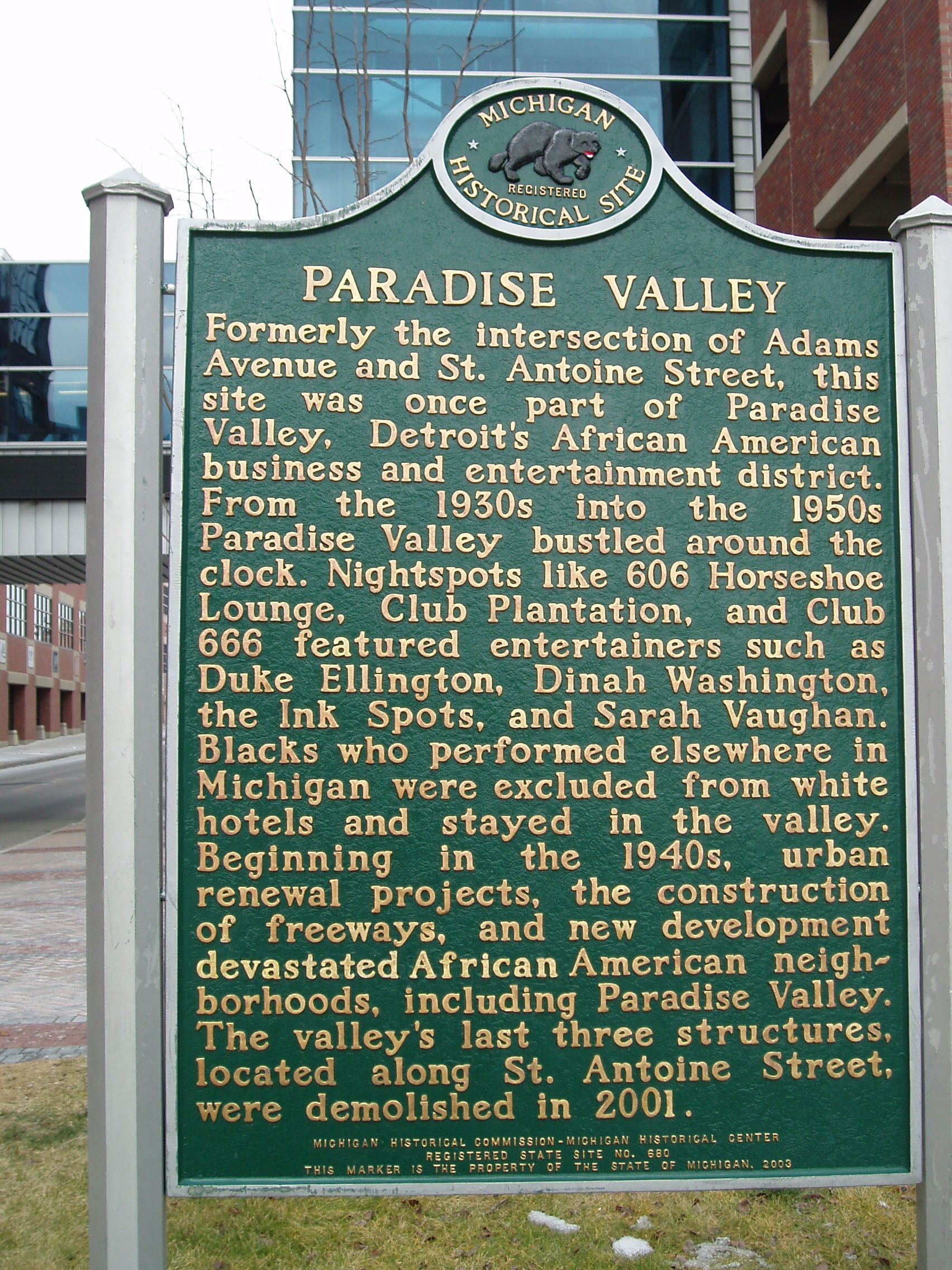 Paradise Valley was the business district and entertainment center of a densely-populated African-American residential area in Detroit — known as Black Bottom — from the 1920’s through the 1950’s.

During the 1920’s, the black population in Detroit swelled from 41,000 to 120,000 as new migrants from the South arrived daily to seek employment in the automobile industry.  The cramped near east side neighborhood of Black Bottom was one of the very few areas blacks were allowed to reside. The residents’ daily needs were amply met by more than 300 black-owned businesses in Paradise Valley, ranging from drugstores, beauty salons and restaurants to places of leisure such as nightclubs, bowling alleys with bars, theaters and mini-golf courses.

The nightclubs and theaters in Paradise Valley were a primary source of income for the residents of the impoverished neighborhood.  Black-owned nightclubs booked popular black artists and attracted mixed-race audiences to shows.  Whites ventured to the Valley to hear Ethel Waters, Pearl Bailey, Ella Fitzgerald and the Inkspots.   The Paradise Theatre, opened in 1941, was the place to hear jazz greats such as Duke Ellington, Billie Holiday, Louis Armstrong, and Dizzy Gillespie.  Whites felt comfortable listening to jazz alongside black audiences.  This changed after the race riots of 1943; whites became reluctant to venture to Paradise Valley and mixed audiences became rare.

Gambling was also big business in Paradise Valley, notably with the Great Lakes Mutual Numbers House and the Valley’s Frog Club.  In 1939, a scandal involving gamblers from the Valley, Detroit police officers and the mayor’s office shocked the city.  By 1942, the mayor, several members of the police force, and two Frog Club members were jailed on charges of gambling and accepting bribes.  Gambling continued despite the crackdowns.  In 1963, the FBI raided the lavish Gotham Hotel — home to many jazz artists while in the Valley — on evidence of illegal gambling.

Urban renewal programs and the construction of freeways in the 1960’s abruptly halted life in Paradise Valley and the Black Bottom neighborhood.  Automobile manufacturers outgrew city factories and relocated to new sites in suburban areas such as Livonia, Wayne and Dearborn.  Expressways were needed to make it easier for workers to commute from Detroit to the suburban plants.  Consequently, the Chrysler Freeway was built and paved over much of Paradise Valley.

Today’s Lafayette Park is the on the former site of Black Bottom. A portion of Paradise Valley is now Ford Field.  Paradise Theatre, the jazz mecca of the 40’s and 50’s, has been renovated and is now Orchestra Hall and home to the Detroit Symphony Orchestra. Many neighborhoods in Detroit were displaced by the building of freeways and the projects of urban renewal, but Paradise Valley suffered the largest losses.  Although it was difficult for displaced blacks to find new housing, many purchased property in the old Jewish neighborhood along Twelfth Street.  Many of the former residents kept pictures of the old neighborhood and these have helped keep the memory alive of the once vibrant Paradise Valley community.

The importance of True Self-Love