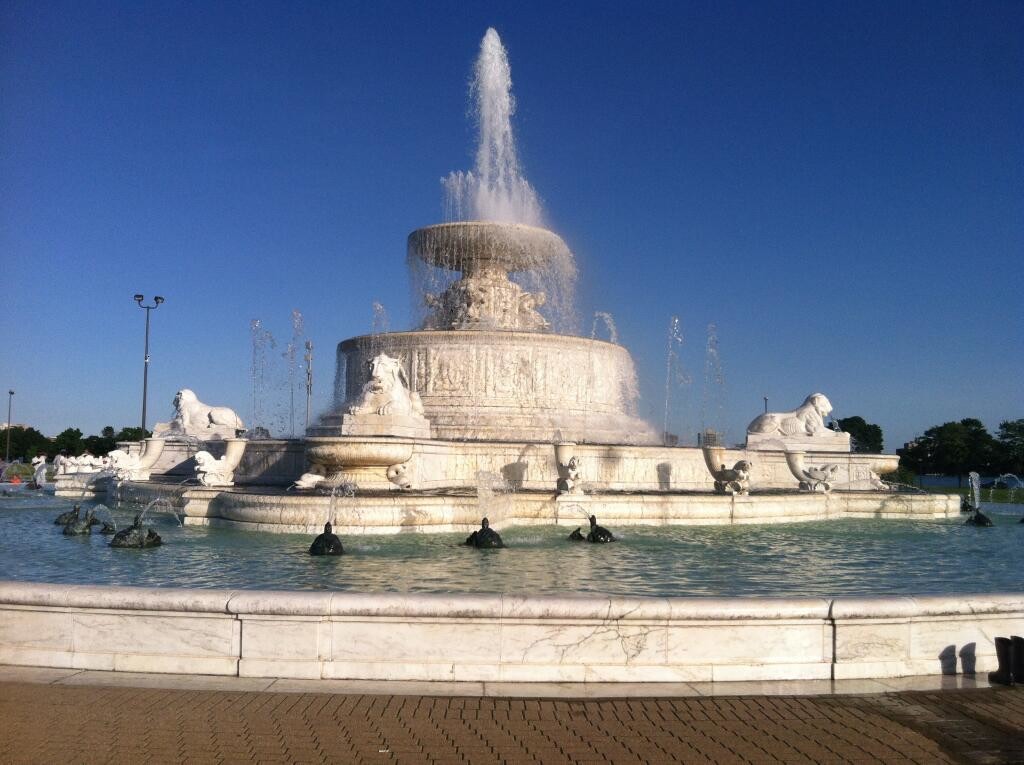 Belle Isle is a recreational island park located in the Detroit River between Detroit, Michigan and Canada.

The island was originally settled by French explorers in the 1700s, who referred to the area as Hog Island. More recently, the island is a product of Parisian inspiration, born out of the late 19th century movement to foster urban parks. Belle Isle is the country’s largest city island park; at approximately 900 acres, it is larger than New York City’s Central Park. Interestingly, both were designed by famed landscape architect Frederick Law Olmsted. The island officially opened in1845, when it became known as Belle Isle.

This lush oasis, connected to Detroit by the MacArthur Bridge, is rich with unique architecture, fountains, statues and manmade lagoons. It is home to a Coast Guard post, as well as the William Livingston Memorial Light, the only marble lighthouse in the nation.

The elegant and historic Detroit Yacht Club, as well as the nation’s oldest rowing club, the Detroit Boat Club, are also located on the island. From 1992 to 2001 and then again in 2007 and 2008, Belle Isle played host to the Detroit Grand Prix over Labor Day weekend.

One of the island’s most famous structures is the Anna Scripps Whitcomb Conservatory, the oldest conservatory in the country. Designed by Albert Kahn, the building opened August 18, 1904, was reconstructed in the 1950s and has since received various renovations. The conservatory currently maintains a vast array of succulents, perennials, ferns, palms and a lily pond garden. The gardens also include one of America’s largest city-owned orchid collections. This free botanical garden and greenhouse is open every day of the year. The Belle Isle Nature Zoo, operated by the Detroit Zoological Society, is also on the island.

Belle Isle is also home to the Dossin Great Lakes Museum, which preserves and celebrates the maritime history of the Great Lakes, the Detroit River and the surrounding region. The Museum boasts the world’s largest known collection of model ships, as well as the high speed racing hydroplane Miss Pepsi. Museum exhibits include the bow anchor of the legendary S.S. Edmund Fitzgerald and the pilot house of the S.S. William Clay Ford. Detroit city’s fiscal problems over the last few decades necessitated cutbacks at the park, which caused much of this heralded oasis to fall into disrepair.  In 2013, the State of Michigan signed a 30-year lease to care for the park, saving Detroit millions of dollars annually and improving upkeep. Michigan’s Department of Natural Resources now operates the park, and as of February 2015, an $11 annual Recreation Passport (providing access to all Michigan parks and campgrounds) is required to enter the park by car.  DNR improvements are underway as this gem is being restored to its former beauty, aided by the Belle Isle Conservancy, a non-profit, volunteer organization dedicated to promoting the preservation and restoration of the island as a beautiful and unique urban resource